The Connection Between Food, Culture & Society

Emily Cummins received a Bachelor of Arts in Psychology and French Literature and an M.A. and Ph.D. in Sociology. She has instructor experience at Northeastern University and New Mexico State University, teaching courses on Sociology, Anthropology, Social Research Methods, Social Inequality, and Statistics for Social Research.

In this lesson, we’ll talk about connections among food, culture, and society. Food is important for our nutrition, but it also has important cultural and symbolic meanings that make it more than what’s on our plates.

Do you have childhood memories of eating a favorite food? Maybe you remember how you eagerly anticipated ending each holiday meal with your grandmother’s sensational strawberry shortcake? Or how your Dad made Saturday mornings extra special by serving up his famous chocolate chip pancakes? If you stop and think about it, you probably associate some of your favorite foods with family memories.

Food is clearly important for nutrition, but it’s also meaningful to humans in other ways. Think about it: we’re the only mammals that cook our food. This makes our consumption of nutrients much different.

Culturally speaking, food is very important. Food can be nostalgic and provide important connections to our family or our nation. Food can be a bridge that helps immigrants find their place in a new society. Food can have a number of different meanings that might not be immediate to us when, for example, we take our first bite of our favorite dinner.

In this lesson, we’ll talk about some of the ways in which food, culture, and society are connected. 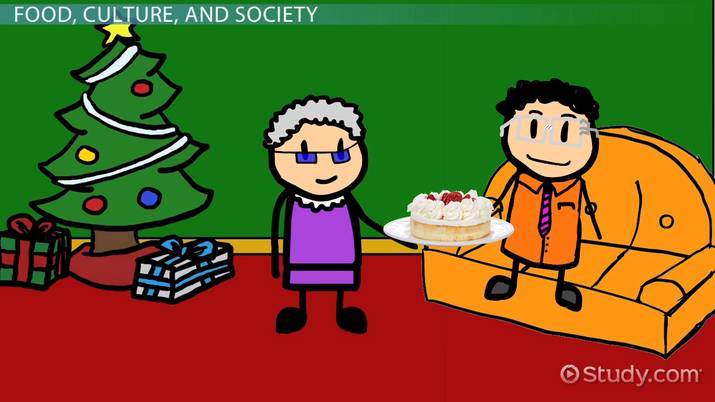 Think of the expression, to break bread with someone. This is referring to the way that food brings people together and is important in our relationships.

Anthropologist Margaret Mead famously wrote about how food is for gifting. What Mead meant by this is that food provides us with something more symbolic than simply nutrition (though that’s certainly important). Food is meant to be exchanged and shared with family and friends. Let’s look at how food and culture relate.

Food also has been used in less positive ways. For example, during periods of colonialism in Africa and other parts of the world, colonizers used food as a way to erase local cultures and incorporate local peoples into European systems of domination.

So, when you order from an Indian restaurant, you might not be eating something that is authentically Indian. Instead, it might be a dish that was introduced by British colonizers (chicken tikka masala is one example).

Cultures also differ in the types of habits they associate with food. For example, in some cultures, it is common to eat with your hands. In other places, however, this is considered rude. Or, at the very least, you’ll get some odd looks from your dinner companions. Sometimes, finishing all of the food on your plate is considered polite, whereas in other contexts, it signals to your host that he or she did not feed you enough.

Food is also tied to religion and ritual. In some religions, such as Hinduism, followers generally avoid eating meat, particularly cows, since they are considered sacred animals by many Hindu sects. Food can help us feel like we’re part of a bigger group or that we have a special link to a particular community, like a religious group.

Let’s eat together: how immigration made British food great

Let’s eat together: how immigration made British food great

FOOD SCIENCE: The Science, Culture, and Economics of Cooking

FOOD SCIENCE: The Science, Culture, and Economics of Cooking